Family finds sanctuary with a Louisville church and the resettlement agency it helped found. 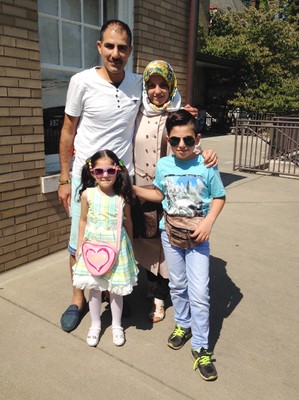 At a time when many countries are closing their borders to refugees fleeing war in Syria, one Presbyterian congregation in Kentucky has opened its doors, offering a home—and a chance at a future—to a Syrian family.

On Aug. 20, members of Highland Presbyterian Church gathered at the Louisville airport to greet the newest refugees to arrive in the area, Shadi and Hanadi Antakli and their five-year-old daughter Tuqa and 10-year-old son Hasan. After piling into cars, the volunteers drove the Antaklis to their new house.

When they arrived, the doors of their new home were open, and the lights were on. Inside, more volunteers waited to greet the Antaklis. The pantries were stocked. Food from their homeland was cooking on the stove. And warm beds were waiting.

“It’s a slightly surreal experience to think that you’re offering this place for a family to live that is entirely unknown to them,” says Matt Nickel, Highland’s associate pastor for congregational life and mission. “They don’t know what it looks like, how it feels. It’s not home yet. But soon it will be.”

At the time, it had been more than two years since the Antaklis fled their home in Aleppo, Syria, in 2013. When Aleppo’s schools closed and medical services became hard to find, the Antaklis decided it was time to leave. “At the moment we felt our children [were] unsafe . . . [we] had to leave the country,” Shadi told a reporter from WAVE 3 News.

For the next few years, the Antaklis shared a small, crowded apartment in Istanbul, Turkey, with three other families. Cost of living was high, and survival was day to day. Finally, after a long process with the United Nations and Church World Service, the Antaklis boarded a plane to the United States to connect with Kentucky Refugee Ministries (KRM).

KRM, which houses its Louisville office at Highland Presbyterian, helps resettle refugees who have been legally admitted to the United States as victims of warfare or persecution. Though now a fully independent non-profit organization, KRM is supported with volunteers and funding from Highland Presbyterian, as well as from many other faith communities and organizations in the area. KRM traces its founding back to Highland when, in 1990, congregation member Donna Craig felt a call—after traveling to Nicaragua and witnessing the partly U.S.-sponsored violence there—to help people escaping dangerous places.

Now, 25 years later, KRM is resettling more than 1,000 people each year, says Cynthia Campbell, a board member of KRM and the pastor of Highland Presbyterian. “The main work is done by KRM staff as social workers, lawyers, and others help families register for school and government benefits, figure out vaccinations and medical care, enroll in ESL, and find employment,” she says. “What the church does is build a team of volunteers to help in the early days of a family’s resettlement, which includes putting together the initial household items such as furniture, cleaning supplies, food . . . really, everything needed so that a family walks into a house that is ready to go.”

Highland sponsors a family each year, and this year they wanted to support a Syrian family. They heard about the violence that began sweeping Syria in 2011, eventually leaving more than 200,000 people dead and 7.6 million displaced from their homes.

After spending two months preparing for the Antaklis’ arrival, the team of more than 15 volunteers is now helping the family adjust and access resources, such as the local community center and a class at Highland that teaches refugee women how to use an electric sewing machine. They take the parents to a halal grocery store and job interviews while others walk their kids to the school bus. The goal is eventual independence. “We don’t do anything they won’t be able to sustain on their own,” says Nickel.

Volunteers also drop by regularly throughout the week. “I don’t know much Arabic, but I do know shukran, ‘thank you,’ and the family is constantly saying that,” says Nickel. “They’re always bringing us water, juice or coffee when we visit. There’s a real kind of hospitality when you go over to their house.”

It’s those relationships that sustain the volunteers over many years, Nickel says. “Here’s a family who has lived through extraordinary circumstances and come to the United States with open hearts and so much to contribute to our community. . . . I guess they change us in a way too.”

“Hospitality is at the heart of the Gospel,” Campbell says, and apparently it’s at the heart of refugee ministry too. “We are all welcomed by the love of God, each one of us. And the obvious response to the gift we have been given is to share that same gift with others.”

That theology of hospitality rings true for Nickel. “There’s of course the call in Scripture to support and welcome the stranger. That’s the ‘head’ part of it, knowing it’s a good thing to do,” he says. “But for my personal faith, it’s knowing that I have received amazing gifts of safety, well-being, and support from my church communities my whole life, and sharing that with others is a way I can proffer my own gratitude for the life that God has given me.”

Members of Highland Presbyterian know there are millions of other families in need of help. “To help just one seems like so little,” says Campbell. “But it’s something.” And that “something” is part of a much larger effort orchestrated not only by KRM but also by Presbyterian World Mission.

“The work we do is similar in that it is meeting the needs of God’s precious children,” says Greg Allen-Pickett, World Mission’s general manager. World Mission, he adds, though, has a different focus than KRM. “Our desire is to change the conditions so that people don’t have to become refugees, so that families never have to separate or leave their home.”

That’s why World Mission is partnering with the National Evangelical Synod of Syria and Lebanon to create a safe and thriving Syria. With the help of the newly formed Syria-Lebanon Partnership Network, U.S. Presbyterians are teaming up with Christian partners in the area to rebuild houses and schools, organize major relief appeals, and advocate for change through the Presbyterian Ministry at the United Nations.

All of these efforts, from creating a home for the Antaklis to putting pressure on Congress, are part of one “faithful continuum,” says Allen-Pickett. “Our call as Christians is to work along that spectrum, whether it means filling a fridge with groceries or empowering partners to change conditions or advocating for policy changes.”

Every action, no matter its scope, matters, says Nickel, as long we as Christians remember the One who is the true author of this generosity and don’t give up when the media coverage dies down. “My hope is that we will be inspired to live our faith by welcoming refugees and that this won’t end when the Syrian crisis ends,” he says. “KRM has been doing this a long time and will be doing this long after.”